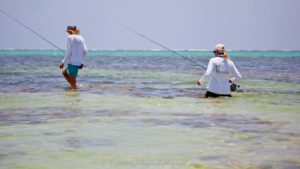 I woke up this morning and realized we are making a difference! I posted this statement on social media today along with the link to the New York Times article from 1994. We – the collective women in fly fishing, made the front page!

The idea that women, twenty-three years ago, were venturing past their comfort zone to learn about fly fishing and the places where they may follow their cast – was in fact, interesting!

So here we are, in 2017. I used to know every single female fly fishing guide in the US. Now, I couldn’t even name them in my home state of Montana! We have slogans, “50/50 on the water.” We have female angling artists represented with major fly fishing brands. Casting for Recovery and Cast One for Hope! – all to help women with breast cancer through fly fishing. And now, an outstanding fly fishing magazine dedicated to women fly fishers, Dun. Orvis, Patagonia, Simms, Columbia – all large outdoor merchandize companies, have embraced women in fly fishing. It took forever, but I’m grateful for where we are now.

I never have operated underneath a glass ceiling. It’s not something I considered. When I get frustrated I find another way. Sometimes, this is a lonely road. I have to listen to myself and stumble through on my path. Anyone who has worked close to me knows my ideas are grandiose! And these “big ideas” get inspired from talking with fellow guides and anglers. Something I get to do a lot. Just recently I was reminded of that super fun feeling playing with strong women anglers as we shot photos for our upcoming online store.

Jenn and Erica were helping me out as model and photographer. It was a beautiful day last week – the day before a giant tropical storm, almost hurricane, hit our island. We donned the latest “Reel Women,” and “Reel Belize,” shirts and facemasks – and played in the water. I was wading though the turtle grass as I watched Jenn rip off a cast to the middle of Erica’s lens. A black death tarpon fly was what she had on, so we kept it for the shoot. Nothing like an eleven weight in bonefish water. Oh well. It worked. And I was so stoked to see Jenn’s strong cast and athletic stance. I had met both Jenn and Erica at separate times when they were fishing with their husbands. Their husbands were already very accomplished fly fishers. I watched both Jenn and Erica – totally different time and place, struggle but not give up, until they were strong fly fishers . I saw the pain in their face when they lost their fish. I saw posture stiffen when their husbands tried to correct them. And there we were, all playing with our fly fishing years later. It was fun to introduce Jenn and Erica because they had so much in common.

And then I stumbled upon that NYT article from 1994 out of the clear blue, yes, twenty-three years later. I reflect now on my most recent play day. In that day, represents what is going on right now with women in fly fishing. A gathering of strong fly fishing women.

Twenty-three years later, it’s still “the new frontier,” – which makes it exciting. As well as sexy. Women have an opportunity to express themselves and their quest to become better anglers like never before!

Women have always fished. Some of the record salmon have been caught by women angling with a fly from their home waters in Scotland. There are so many stories…it’s just that they were not documented or shared in the main stream fishing magazines at the time. The same with TV – the content was there, but the audience responded painfully slow, so shows were cancelled.

It’s all changing! We have new platforms to spring from. As I grab a hold of that “fun” from last weeks adventure with fly fishing gal pals, I’m energized. What is it going to look like in twenty-three more years? Well, I think we can say without a doubt, that there will be more women exploring and protecting the waters of this planet. With a flyrod, with their voice and with their smile.